Chinese writing is non-alphabetic and non-phonetic. The meaning of a character can be learned without knowing its pronunciation.

Towards the end of the 1950’s, the People’s Republic of China began to simplify a certain number of characters by reducing the number of strokes. Simplified writing is written horizontally from left to right. In Hong Kong, Taiwan and most Chinatowns around the world, traditional characters are used. They are written vertically from right to left.

Chinese characters must be centered in an imaginary square without filling the entire square. 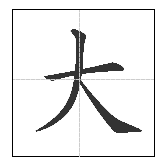 There are eight fundamental Strokes:

The essential rules of stroke order are:

Bearing in mind the rules concerning stroke above, you are ready to write your first character.

You first character is zhòng.

Once you are able to write the above character, you are ready to move on to the next section. This is the end of the basics lessons.

Pronunciation Basics Lesson One: How are you?